No one starts out to become bitter. Bitterness shows up when we fail to handle our disappointments. Something happens that we wish hadn’t and we’re Disappointed. If we can’t let it go, it turns into Discouragement where we live fearing it will happen again. Discouragement turns into Disillusionment where we become obsessed with always feeling Discouraged. Disillusionment becomes Defeat where we live with no hope of ever being free from this Disappointment.

Bitterness is like a seed planted in our soul from some painful event that will grow into a plant that overcomes our life if not removed.
Kudsu was introduced into the South to help prevent erosion on bare hillsides. It is a fast growing ground cover plant. Only problem it grows like crazy in America and has literally taken over huge sections of southern states.


It seemed innocent enough when first introduced but soon it took on a life of its own and took over. Bitterness does the same thing.
Esau’s dad recognized his son’s tendency toward bitterness and stated a blessing over him to deal with it. Isaac said: But it shall come about when you become restless, that you will break his yoke from your neck. Esau was bitter toward his brother Jacob. He had good right to, but right or not bitterness comes with consequences. He was consumed with anger to the point of intending Jacob’s death.


The answer was in his father’s blessing. When you get tired of living a defeated life, disconnect yourself from the disappointment. How? Forgive the one who caused the event that produced the disappointment and trust God to turn the pain into joy. Both steps are essential!

One tribe had an interesting punishment for killing someone. The killer had to carry the corpse, tied to his back. He could never get rid of or away from his crime. It was a constant reminder of one moment in time.


Often we carry reminders that haunt us about a past event. Because of how badly we were wronged we justify becoming bitter. After a while that bitterness starts to stink, but we hang on to it anyway. Thinking we’re punishing the one who hurt us, we’re creating our own defeat.


Tired of hurting yourself? Break the connection. Disconnect from the disappointment. Forgive and move on. Let it go.
Posted by Cary Franklin Smith at 7:58 AM No comments:

So You Think You're Wrestling With God?

The wrestling match started after Jacob told God of his fears about reuniting with his brother, Esau, who when last heard from had promised to kill Jacob. Jacob wanted to return home but was afraid Esau would carry out his threat, so he prayed for God to keep him safe. In that prayer he reminded God of the promise to create a vast nation from him, as though he had bargaining chips to throw out on the table.
Then the wrestling began and lasted all night. Remember he’s wrestling God who dispatches His opponents with the word of His mouth. Thinking he has God in a power grip, God simply touches his hip and knocks it out of socket. In desperation, Jacob, now defeated, begs for blessing. The blessing is changing his name to the name by which God intends to complete his work in Jacob’s life. He is now Israel—God will contend. As Jacob, in his own strength and determination, he was far too limited to accomplish what God had in mind. He could contend only so far and usually by trickery. His ability to contend with people lacked the spiritual impact that would fulfill God’s intentions. God wrestled with Jacob so that He could contend for Israel. He subdued one so He could fight for the other.


In his prayer, Jacob asked God to be faithful, which is like asking a Suma wrestler if he is heavy. Of course God is faithful! We don’t make Him so, or declare Him so, He is so! But the greater issue from God’s perspective was could He trust Jacob to be faithful to trust Him as faithful. The test was not about whether God would take care of Jacob’s concerns but would Jacob yield his life, family and future to God’s intentions of how He would take care of Jacob.
The times we struggle with God have nothing to do with Him but everything to do with His desire to strengthen our faith to trust Him more. Jesus proved God’s ability to change circumstances. But why would He do so until He has accomplished His purpose through those circumstances?


The battle today will not determine God’s faithfulness. He’s not being tested. It is designed to give us the opportunity to let Him be faithful in our behalf. Don’t think we are wrestling with our problems. Our problems are wrestling with us to see if we have the courage to trust God to win the battle for us.
Posted by Cary Franklin Smith at 8:54 AM No comments:

One of our confounding tendencies is to judge our circumstances before they have played themselves out. Our intolerance of unpleasantness rushes us to label matters with good or bad simply based on how we see things in that moment and how the moment feels.
Anyone can take a day and divide it into segments, then evaluate that day by one of those segments. If we like what goes on during that fragment we label the day as good. If we don’t like what goes on, it’s a bad day. Obviously, that’s quite a small-minded approach to life. Allowing one incident so much power over us that it can, in fifteen seconds, ruin fifteen hours of a day is highly irresponsible.


We are rarely in the best position to judge whether something is good or bad. We’re too personally involved. Only when we can detach and trust the One who has perspective can we release ourselves from the burden of preference. Only God knows what we’re going through. We don’t. We know the moment. We know how we feel about it, but we don’t know where it’s taking us or how it fits into the larger context of what God wants to accomplish in our life.
Faith requires us to trust He is working all things together for good at all times—not sometimes or under rare occasions. I don’t have to like it, but it will benefit me greatly if I will acknowledge that He is good and His mercy endures forever. He knows the beginning and the end of all things. He knows the why and why not. He defines the good.


When I step aside as judge and yield that role to Him, I’m free to concentrate on remaining faithful.
Posted by Cary Franklin Smith at 9:52 AM No comments:

Waiting for the Rainbow

Looking for the good in things gone bad is hard work. Since we typically go with the flow, we don’t spend a lot of time trying to find the benefit in our problems. Problems, by definition, are undesirable disruptions to our lives. Our goal is to get out of them not analyze them to find value. 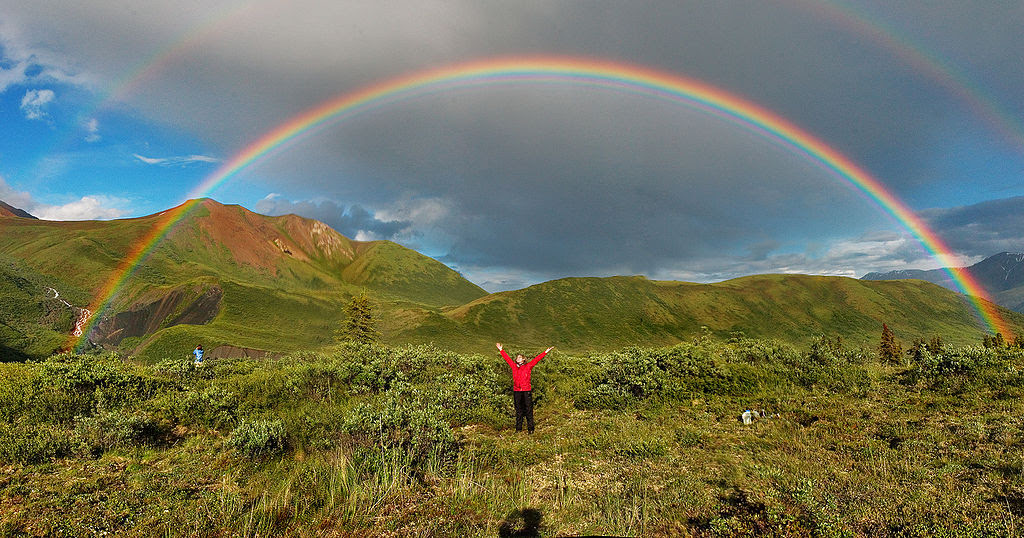 At this point in my recovery from the flu I have lost my sense of taste. Surely it will come back but in the meantime I’m trying to look for the benefits. One is drinking soured milk. I have this repulsion to soured milk. I suspect what’s left in the container has gone bad but since I can’t taste it, I’m still using it on my cereal. Of course I can’t taste my cereal either so I’m eating out of duty rather than pleasure.

As you, I’ve heard stories about people who have gone to their doctor with one complaint only to find in examination they had a much more serious situation secretly attacking their life. Had they not had the initial problem, the doctor would not have discovered the more serious problem.

My dad was scheduled to ship out for the Philippines in WWII. The day before, he went to the dentist to get a tooth fixed and while there the doctor thought he could address another problem with experimental radiation. My dad got sick from the treatment. So while his battalion pulled away and headed into conflict, my dad lay in a hospital bed recovering. As a result of the radiation, my dad developed cancer leading to subsequent surgeries and treatment. By surface evaluation the Dentist really messed up. But later he discovered that when his buddies arrived in the Philippines they encountered harsh battle. Most of the men in his outfit never returned from the war. Had he not experienced the problems with the dentist, he very likely could have been a casualty of the war. The bad the dentist did actually turned out to be a blessing for my dad.

It’s hard to think that in the midst of our difficulties God may be doing a special work that makes what seems bad become good, but that’s what He promised.

Paul spent much time imprisoned because of opposition to his work. How bad that must have been! Yet,
while he was imprisoned, he wrote some of the most important books of the New Testament. God took ugly and made it beautiful.

Somewhere, hidden within our circumstances, is the good God wants us to discover. Look for it. Hold off any final assessment whereby we characterize our situation as bad, hopeless or tragic until we see what He’s up to. Believe in the good. Sometimes you just can’t get there without going through this.

Endure the storm but anticipate the rainbow.
Posted by Cary Franklin Smith at 9:09 AM No comments: