Standing on the Promises - The Key (Abraham) 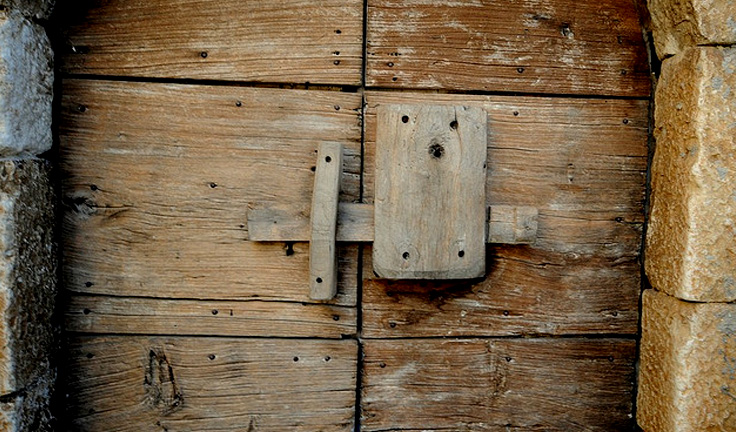 The oldest lock and key that has been found was discovered in the ruins of the Assyrian palace in Nineveh, dated to around 700 BC. The Romans were the first to make locks and keys out of metal. They are also credited for making the skeleton key that was still being used when most of us were kids.

Modern locks and keys were developed in the 1800s but didn’t start replacing the skeleton key until the 1940s.

Today we have key fobs. Keyless entry. At my son’s church he just passes his ID badge in front of a sensor and the door unlocks. You can even lock or unlock your house with your iPhone from anywhere in the world.

Being able to lock what you want secure gives great comfort. Having a means to unlock what’s locked is essential. But here is the one matter that crosses all barriers: What good is a key if you don’t know what it’s for and don’t know how to use it?

In 1666, Philipp Spener became pastor of a Lutheran congregation in Frankfurt, Germany. He gave immediate attention to encouraging a “more extensive use of the Word of God among us.” He believed the Bible was the key factor in living the Christian life—not just a reference book for the sake of biblical knowledge.

The Reformation was now 150 years old and the Bible had become the source of doctrinal divisions and boundaries and a proof text in theological discussion but not a source for attending to the spiritual needs of the people. The church was strong on telling people what to believe but weak in telling them how to live out those beliefs. Spener wrote, “It is by no means enough to have knowledge about the Christian faith, for Christianity consists rather of practice.”

2Tim 3:16-17 All Scripture is God-breathed, and is profitable for doctrine, for reproof, for correction, for instruction in righteousness, that the man of God may be perfected, thoroughly furnished to every good work.

That’s what it is, but what does it do?

1Th 2:13 For this reason we also constantly thank God that when you received the word of God which you heard from us, you accepted it not as the word of men, but for what it really is, the word of God, which also performs its work in you who believe.

How do we get that performance God promises into our lives? What is our key to unlock what God said is possible?

Confidence in the God who spoke these truths to us.

2Pet 1:3-14 seeing that His divine power has granted to us everything pertaining to life and godliness, through the true knowledge of Him who called us by His own glory and excellence. For by these He has granted to us His precious and magnificent promises, so that by them you may become partakers of the divine nature, having escaped the corruption that is in the world by lust.

The expectation was: that by embracing the promises, we would to become partakers of the benefit of those promises. Partakers are those who receive and apply the promises to their lives. We’re participating in what God has said.

It is funny that so many believe in the hope of Heaven yet will not believe in the provisions of God between now and then. Both messages are written throughout the Book. Why believe one and not the other?

A God powerful enough to secure our salvation, is also powerful enough to deal with our family crisis, our health issue, our finances, fears, burdens, loneliness and concerns. He promised both. If we live in the hope for life after we die, we must also live in the confidence of His promises for while we still live. The same key unlocks both.

Charles Spurgeon, an English pastor from the 1800s, said: “I would recommend you either believe God up to the hilt, or else not to believe at all. Believe this book of God, every letter of it, or else reject it. There is no logical standing place between the two.”

Let’s take Abraham and see how he became confident in God’s promises to him?

Gen 15:1-4 After these things the word of the LORD came to Abram in a vision, saying, "Do not fear, Abram, I am a shield to you; Your reward shall be very great." Abram said, "O Lord GOD, what will You give me, since I am childless, and the heir of my house is Eliezer of Damascus?" And Abram said, "Since You have given no offspring to me, one born in my house is my heir." Then behold, the word of the LORD came to him, saying, "This man will not be your heir; but one who will come forth from your own body, he shall be your heir."

God’s promise was Abraham would become a great nation. All he needed was an heir.
Gen 16:1-2 Now Sarai, Abram's wife had borne him no children, and she had an Egyptian maid whose name was Hagar. So Sarai said to Abram, "Now behold, the LORD has prevented me from bearing children. Please go in to my maid; perhaps I will obtain children through her." And Abram listened to the voice of Sarai.

What harm did it do? It was a reasonable solution. It was socially acceptable. It produced an heir. Problem solved. Our actions, even when they come with good intentions, but minus faith, do not accomplish the purposes of God. Without faith God is not pleased regardless of what we do. Why? We tossed the key and jumped the fence. That makes us a thief, not a privileged Child of God.

About ten years later: Gen 17:1 Now when Abram was ninety-nine years old, the LORD appeared to Abram and said to him, "I am God Almighty [el Shadday]; walk before Me, and be blameless.

Blameless meant it was Abraham’s job to trust in what God had said, even when and especially when the circumstances of that promise would be challenged.

Challenged by his wife: what God said is impossible. We must help Him. There is always someone to discourage you from trusting God. Satan will see to it.

Challenged by time: it’s been too long and we’re too old. Waiting is the hardest part of trusting in the promise of God. What do we do: we take matters into our own hands, run ahead of God or give up.

Challenged by a test: Gen 22:1-3 Now it came about after these things, that God tested Abraham, and said to him, "Abraham!" And he said, "Here I am." He said, "Take now your son, your only son, whom you love, Isaac, and go to the land of Moriah, and offer him there as a burnt offering on one of the mountains of which I will tell you." So Abraham rose early in the morning and saddled his donkey, and took two of his young men with him and Isaac his son; and he split wood for the burnt offering, and arose and went to the place of which God had told him.

What was Abraham thinking? How do you reconcile the promise associated with Isaac with this request? He was the fulfilment of God’s intentions to create a great nation through Abraham. There was no plan B. The promise was specific to Isaac. So, if God said, “Let’s take Isaac away,” God must have had a means by which He would restore Abraham’s son.

Heb 11:17-19 By faith Abraham, when he was tested, offered up Isaac, and he who had received the promises was offering up his only begotten son; it was he to whom it was said, "IN ISAAC YOUR DESCENDANTS SHALL BE CALLED." He considered that God is able to raise people even from the dead, from which he also received him back as a type.

Killing Isaac would have killed the promise. So how do you stand on a promise that is suddenly hit with a contradiction?


Abraham stood on God’s promise in Isaac. Did he tremble standing on the promise? You bet he did. You don’t face a challenge of faith without trembling. Abraham stood even though he didn’t know how God would accomplish what He promised. We don’t need to know how.

That’s what unbelief asks: “How can this be?” Confidence says, “This shall be!” We pray, “God, I don’t know how you’re going to do it, but here I stand.”

Confidence operates like an accountant, writing the promise on the assets side of the journal. In our own finances we keep a record of what we owe and what we have as resources to pay what we owe. If an unexpected expense comes in, we check with the assets to see what we have to cover it. Confidence operates the same way. Whenever we face a trial, we can look on the assets side to see what promises we’ve been given.

Abraham didn’t have the Book. But He had the God of the Book. Gen 18:13-14 And the LORD said to Abraham, "Why did Sarah laugh, saying, 'Shall I indeed bear a child, when I am so old?' Is anything too difficult for the LORD? At the appointed time I will return to you, at this time next year, and Sarah will have a son."

What was God doing? Handing him the key. “Abraham, stand on this. I am God Almighty. I can guarantee My promise because nothing is too difficult for Me.”

Keep that in mind when you face your difficulties. Confidence in the God who keeps His promises is the key that unlocks those promises.

Serene Jones is president of Union Theological Seminary in New York. Founded in 1836 with the charter to promote the Kingdom of Christ, the early professors were required to affirm they believed “the Scriptures of the Old and New Testament to be the word of God” and the “only infallible rule of faith and practice.” Not so today. Ms. Jones said in a recent interview she doesn’t believe in the bodily resurrection of Christ, the power of prayer, a literal heaven, or miracles.

She said, “At the heart of faith is mystery. God is beyond our knowing, not a being or an essence or an object. I don’t worship an all-powerful, all-controlling omnipotent, omniscient being. That is a fabrication of Roman juridical theory and Greek mythology.”

If we have no confidence in the God in whom nothing is impossible, then we must belong to a lesser god who guarantees nothing, makes promises he cannot keep and has nothing to offer that the world cannot provide.

Our God promises the impossible is doable.


Posted by Cary Franklin Smith at 9:01 AM